Kol Rina was a Jewish a capella group, which ran for about 10 years from the late 1990s until the mid-2000s. The rest of this page is for historical interest.

Kol Rina is a Jewish a cappella performance group. It was started by a small group of enthusiasts in Cambridge University in 1996. We have since grown to a group of 10 - a mixture of men and women from a range of Jewish backgrounds.

We feel we are a breath of fresh air for Jewish music in the UK. Not only because we are the only Jewish mixed a cappella group in the country, but because of our unique repertoire. Almost all of our songs are original compositions by members of the group. These new works draw on our varied sources of inspiration - including traditional, classical, Chassidic, gospel, minimalist and popular music. Staying true to our roots, we sing predominantly in Hebrew, as many of the lyrics are excerpts from the liturgy.

Our name "Kol Rina" is Hebrew for "Voice of Joy" - chosen because we sing for enjoyment - from creating our music and sharing it with others. As a non-profit group we have relied on the support of organisations like Yakar for practice space. In turn we contribute to the community through free performances, workshops, recitals at local Jewish care homes, and fund-raising concerts for charity.

We started in 1996 in Cambridge (our student days!), inspired after hearing an American Jewish a cappella group on tour. In our first few years we performed at various Cambridge University Jewish Society events and recorded some tracks together with Krazy Klezmer, another Jewish student group.

In 1999 we moved the group to London where we aquired new members and began weekly practices. In January 2002 and 2003 we featured on the Shalom FM community radio station. We performed our first full concert in June 2002 at Yakar in London which was greatly appreciated by our friends and families! Since then, we have perfomed at the Spirit Matters conference and at Yom Masorti. We have performed and run numerous workshops at the annual Limmud Conferences over the years, as well as at the Leeds One Day Limmud in 2001 and 2003.

We won a grant from the European Association for Jewish Culture in January 2003 to record our first album "Ashira".

In 2004 we performed alongside a gospel choir at an event organised by the Council for Christians and Jews.

More recently, we have recorded some of our newer music on our second album, "Keshoshanah". 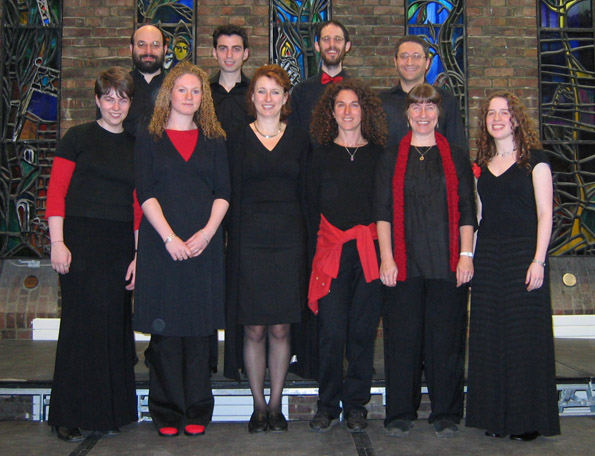 We enjoy sharing our music with the people around us. One way in which we do this is by giving small concerts at local care homes. As well as performing, we run a cappella singing workshops to varied audiences. We are also available for private functions. If you would like Kol Rina to perform or run a workshop for your own event/organisation do get in touch.

Want to get involved?

We are looking for new members! We will be holding auditions soon, so if you're interested, please contact us.
We're also looking for people who can help out with publicity, bookings, art/design and choreography.

These organisations are among our friends:
Limmud
Shock Productions